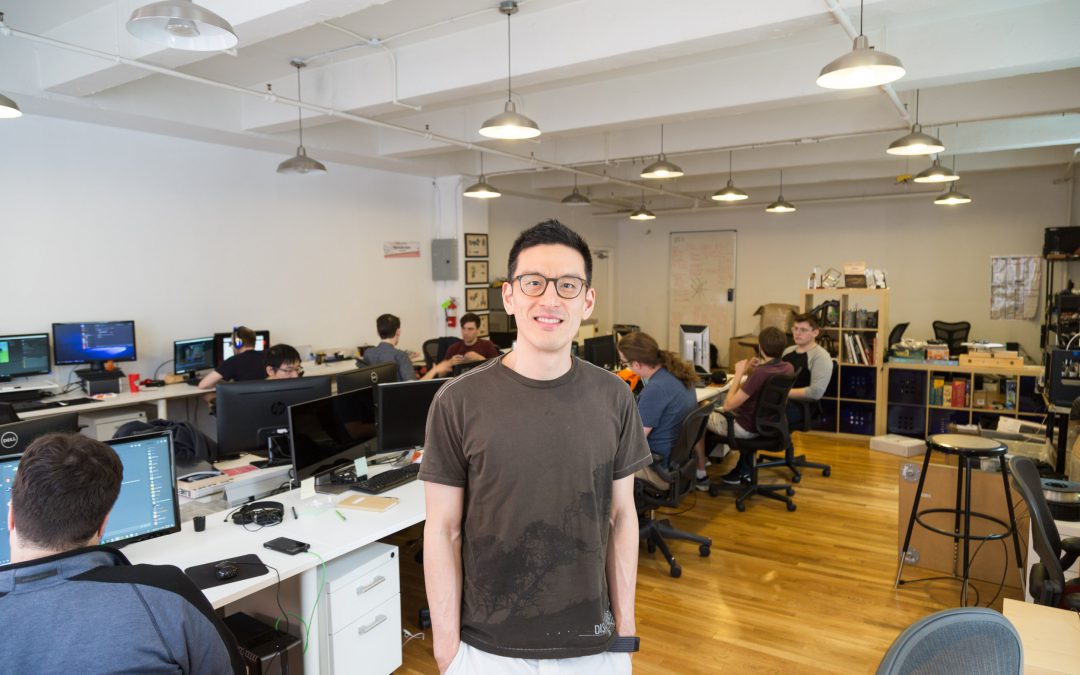 Muse Games is an independent game development studio based in NYC. The studio is best known for its flagship game Guns of Icarus Online, a steampunk-themed multiplayer first-person shooter. Muse Games is also behind puzzle platformer CreaVures, and is currently developing its latest arcade brawler Hamsterdam.

TAP-NY had the chance to speak with Howard Tsao, CEO and Team Lead of Muse Games about what it’s like to found and run a game studio with multiple game titles under his belt.

I spent my elementary school years in a city in Taiwan called Hsinchu. I moved to the SF Bay Area at the age of 12 and spent my middle school, high school, college, and the first few years of my career there. I came to NYC about 14 years ago for business school at NYU. I honestly thought I would go straight back to the Silicon Valley after grad school, but 14 years later, I’m still here. I’ve had a diverse experience and background growing up, spending about a third of my life thus far in 3 very disparate environments. I think I learned a lot in each place, and having been fortunate enough to see different parts of the world helped broaden my worldview.

After grad school, a couple of friends and I decided to start a venture together, integrating web contents with virtual spaces and aiming to create a virtual world with real-life contents and deeper meaning. At the time, the idea of virtual worlds was nascent, so we dove headlong into it. We built some promising technology and tools. For instance, we integrated people’s travel blogs and photos with a 3D, navigable globe, essentially creating a “where I’ve been” travel map with actual travel contents in 3D. Yet, we struggled to find a business model, and the venture didn’t gain the traction we needed or hoped for. We closed down the venture and parted ways. Along the way though, we had built a small team and gained quite a bit of know-how and expertise with the Unity engine. I then started Muse Games with that team and was able to do the thing I always loved and dreamed of doing – to make games.

How did Muse Games get started, and what’s your role today in the studio?

The start of Muse Games was born from the remnants of another startup. In the beginning, we took what we learned from the previous startup, created a few small-scoped 3D web games, which were very new at the time, and hosted on our site free-to-play. The reception and installs from those games were better than we expected, and that initial positivity gave us the drive and confidence to continue. With our first commercial game, Flight of the Icarus, we were selected to be on Steam through their curation process at the time, and it was fortuitously released as a Steam Mac Store launch title. Technically, the game is also the first Mac Windows cross-platform Unity title to be on Steam. The early success gave us the validation we needed to keep going.

Guns of Icarus has been a hit success with great reviews on Steam, and you’ve launched a few successor titles. Can you tell us about the Icarus series as a whole and what the inspiration was behind the game mechanics?

The journey from Flight of the Icarus to Guns of Icarus Online was an interesting, arduous, and rewarding one. With Flight, it was a novel and unique combination of a set of mechanics, combining turret shooting with time management. While we were working on the game, we had a larger vision for a teamwork centric multiplayer experience but needed to be conscious of scope with our limited budget. With the initial success of Flight, we aimed to expand distribution, especially in Asia, as Steam was predominantly US and Europe centric at the time. In a publisher meeting, they had asked if we were interested in turning Flight into a multiplayer experience, and of course we were. Over the course of the next few months, we worked with the publisher to make that a reality with the publisher funding a significant portion of development.

A promising start working with the publisher quickly took a toxic turn. We executed on all the specs items and milestones we agreed upon at contract signing, but the publisher withheld payments, especially towards the end of the prototype to hold us hostage for additional requests and features. Throughout the prototyping phases, different constituents in the publisher’s bureaucracy had divergent requests with no effective producing or project management, and it was often left for us to navigate and manage their own bureaucracy. Additionally, while committing to our artistic vision at the start, the publisher eventually wanted to influence aesthetics. At the end of the prototype period, we decided to exit from the publisher relationship, and luckily we had a clearly defined exit and retained our IP. That didn’t stop the publisher from blatantly threatening to copy the game though. Despite the threat, we decided to terminate the relationship and strike out on our own.

Independence and creative freedom came at the price of financial hardship, and we struggled to bring Guns of Icarus Online to fruition. On the eve of release, the game debuted in the top 5 on Steam, and we were simultaneously elated and horror struck. For on that same night, Hurricane Sandy ripped through New York City. Our servers at the server-hosting service were down, and so were Steam’s authentication servers. People were not able to get into the game, and we were watching reports come in one every few seconds on the Steam forums. We were taking turns replying to players, whenever we had electricity and internet, which was sporadic at best.

Additionally, players who could get into the game reported issues. Normally, we’d be able to make fixes and patches rapidly; however, our build server was in our room, and our building was cordoned off in a flood zone. To deploy a build with fixes, my teammate had to bike in under gale force winds, sneak under police cordone, wade through flood waters swimming with rats, and get up to our room to rescue our build server. He had to ditch his bike, which he miraculously recovered later, carry the server machine, and ride the bus to my place, which had working electricity and internet. We could probably count with 2 hands how many hours of sleep we had combined that launch week, fixing issues and responding to players day and night. Fortunately, a lot of the players were understanding, and influencers began to find the game. Once we were back on our feet, our release was successful despite going through a literal disaster. The intense teamwork and communications demanded by the game combined with Steampunk aesthetics ended up resonating with players and influencers, and the game grew in popularity and had an extended long-tail. We were then able to release a second co-op version of the game with a successful Kickstarter campaign. The story of Guns of Icarus was quite literally one of weathering the storm.

Over the past few years what’s been the biggest challenge for you and the team?  How about your favorite story/experience?

One of the biggest challenges was transitioning from a major game’s long-tail to renewing innovation and re-establishing a content pipeline. The Guns of Icarus series was for a time all-consuming as we kept up regular content and feature updates. Sustaining a project for such length, though, was taxing mentally. As the development of Guns of Icarus Alliance, the co-op successor of the series, was nearing conclusion, we started transitioning to new projects. While we were working on Guns of Icarus, to maintain creativity, we would organize into small 2-3 person teams and game jam for 2-3 days internally. The game jams would focus on novel game mechanics, and we would explore and tinker with the mechanics during our spare time. Projects such as Hamsterdam, Embr (a frantic co-op firefighting game where you are a private, e-hailed firefighter for the Embr App), and everything else that we’re working on originated from these jams. To support our new projects, we reoriented the team into small project teams, each with a lead. Our current team structure is not unlike the one we had when we were organizing our game jams. The challenge then becomes how to stay agile and efficient while making sure we have good cross team communications and support.

Tell us about your upcoming release Hamsterdam!

Hamsterdam is a cross-platform hamster kung-fu beat’em up for the Nintendo Switch, mobile, and PC platforms. It is a tale of a resistance led by an unlikely hero and a game where classic brawler mechanics meet rhythm & precision. You’ll need a blend of martial arts combos, quick reactions, and timely counters to survive confrontations with gangs of vermin and boss battles on the streets of Hamsterdam.

Hamsterdam was born from one of our game jams, and we dabbled with it through the development of Guns of Icarus. Last year, we started to dedicate time and effort to bring the project to fruition, and we’re nearly there!

Something we’re proud of with Hamsterdam is that it gives us the opportunity and canvas to push the boundaries of animation design, bringing a non-humanoid character to life and making it relatable. The combat animation choreography is both faithful to real martial arts, meticulously presenting the feel and weight of impact and body motion, and at the same time fantastical. Our art and animation lead Derek is a real-life Wing-Chun master, so he’s able to incorporate a lot of the actual principles of martial arts to ground the character animations and make them convincing. But at the same time, the hamster Pimm is a furball, so we had to imagine what it would be like if a hamster becomes the kung fu master. The project has been challenging, but incredibly exciting and rewarding at the same time.

Any advice for our readers who are aspiring game devs?

Getting started in game development has never been easier, with game engine solutions being readily affordable. At the same time, discoverability on distribution platforms has arguably never been tougher. Every game is a startup project, full of possibilities and challenges. I think my advice would be to take all the creative risks but be very conscious of scope. Ultimately, I think that in a sea of content, that willingness and “sticktoitiveness” to create something people haven’t seen before is what could set a game apart.