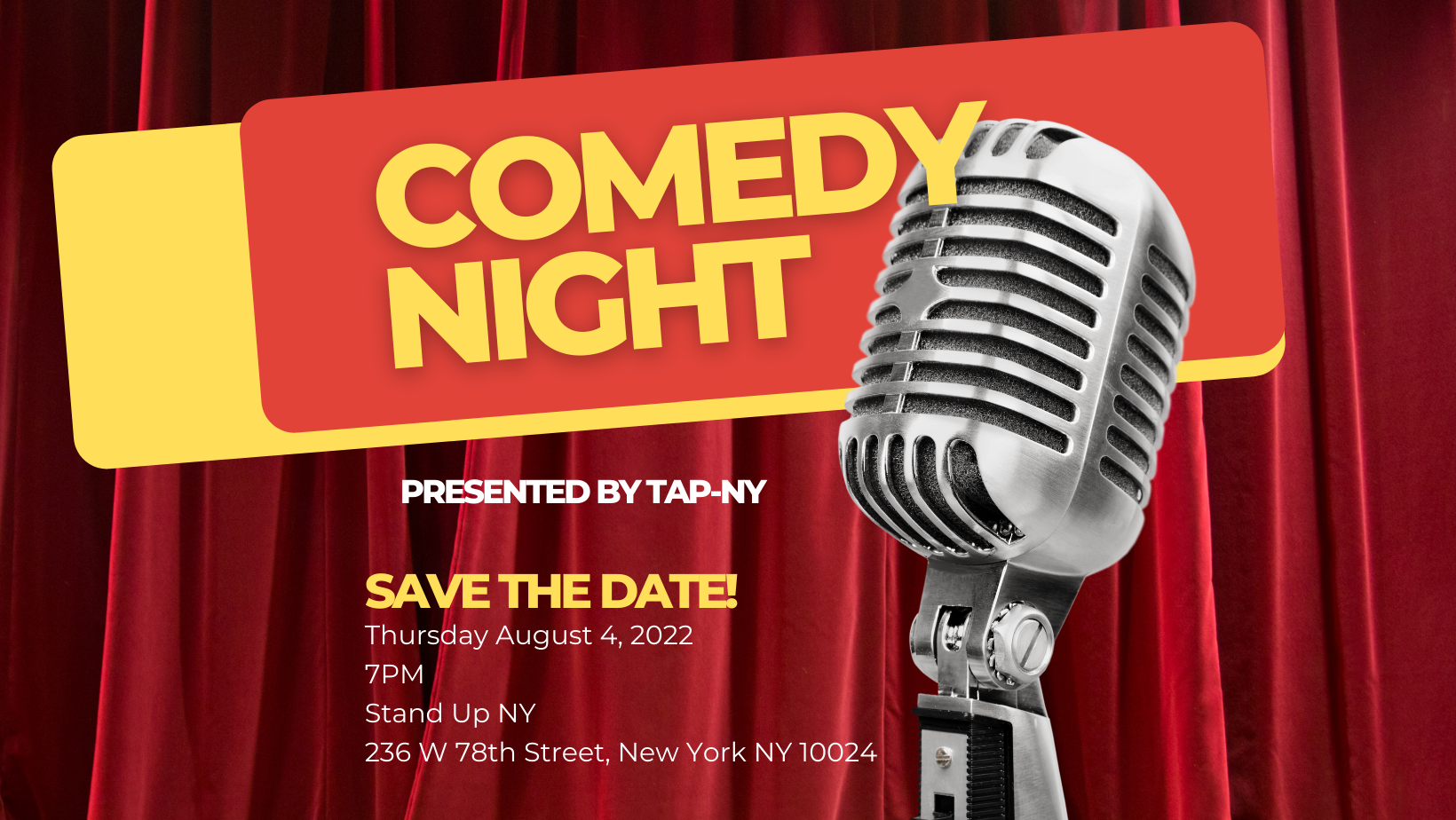 Ready for a night of fun, laughter, and mingling? Join us for our first ever comedy event in partnership with Stand Up New York!

Featuring headline performer Mic Nguyen, co-host of Asian, Not Asian, the night will definitely be full of fun.

Current Lineup (subject to change):
Mic Nguyen (Headliner)
Mic Nguyen (@nicepantsdude) is a writer and comedian who has written for such illustrious websites as NBC News, Racked, and his mom’s 60th birthday e-vite. When he’s not tweeting you can find him doing stand-up onstage, working on a sci-fi short story about sneakers, or co-hosting the Asian, Not Asian comedy podcast. He lives in Brooklyn.
Meka Mo (host)
This Queens N.Y. native regularly performs at venues all around New York City. She is producer of Purple Park Comedy, a monthly show in her hometown of Astoria at Q.E.D and Queens² mic, a weekly show at the Tiny Cupboard, committed to featuring BIPOC, AAPI and LGBTQIA comedians. She is also the winner of the 2021 U.S. Comedy Contest, a Finalist for 2021 Ladies of Laughter and a participant in the Coney Island, Rochester Fringe and Oakland Comedy Festivals. When she’s not performing, you can catch Meka Mo across your streaming platforms as co-host of We’re Done Here , an emotional wellness comedy podcast.
Esther Chen
Esther Chen is a stand-up comedian, actor and host from Taiwan. In addition to being seen on HBO, Hulu, Amazon, FX, Buzzfeed, HBO Max and MTV, she was nominated for the best-supporting actress at Planet Connections Festivities. She is a true trilingual between Mandarin Chinese, English and Taiwanese. She is also the dialect coach for Mr. Robot Seasons 2&3 and contributed to the translations on the show. Most recently, Esther recurred in And Just Like That, and shot a promo for Jerry Seinfeld’s newest Netflix special “23 Hours to Kill.” She co-produced “Asians Strike Back: a Coronavirus Comedy + Science Show,” which got featured on New York Times, CBS and TimeOut. She is the proud creator of Weekly Takeout: an Asian American late night show on IG, the award-winning pilot Wide Open and Chinese podcast 好戲開場. She appears regularly at comedy clubs in NY and all over Taiwan.
Peter Murray
Peter is a writer and performer based in Brooklyn. He performs regularly all over New York, including at venues like Gotham Comedy Club, The Tiny Cupboard, Club Cumming, Broadway Comedy Club, and many more. Over the pandemic, Peter focused on writing and producing music under the name Pet Project. His first single is available now on all major streaming platforms.
Erik Bransteen
Erik Bransteen is a New York City based stand up comedian and actor. He has written material & jokes for VH1, Saturday Night Live, ABC Radio, TMZ TV show & more! He performs regularly at all New York City Comedy Clubs.
Peter Wong
Peter Wong is a comedian from Queens, NYC and has been featured on Tosh.0 He was recently selected as one of New York Comedy Festival’s Comics to Watch 2021. Watch his videos on YouTube by searching Peter Wong.

Happy Hour begins at 7:00PM, and the comedy show will begin promptly at 8:30PM. There will be an hour after the show for mingling.

Tickets are limited, and prices will go up fast, so secure your spot before it is too late – you don’t want to miss the hottest event this spring!

Without pre-sale tickets, admission at the door will be $20 the day of the event.